They say that king Fernando III called Carmona 'The brightest star to shine in the sky' and it's a city which enchants each and every visitor.

They say that king Fernando III called Carmona 'The brightest star to shine in the sky' and it's a city which enchants each and every visitor. 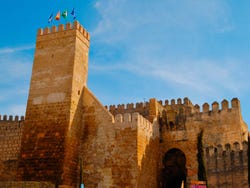 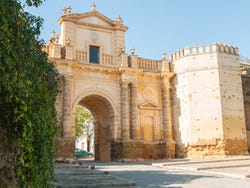 We'll pick you up and hit the road to Carmona.

After a 30 minute journey, we arrive at the town itself, which won the bronze medal, for most charming village in Andalucia in 2015. We'll head back to the middle ages, visiting the remains of the Fortress of San Pedro, which retains its noble form thanks to an extensive restoration.

We'll tour the historic centre by foot, from the Cordoba Gate to the Sevilla Gate, passing through the San Fernando and Blas Infante squares. On this your we'll explain the gothic, Muslim and baroque heritage that the churches of San Bartolomé and San Pedro hold.

Then we'll head even further back in time, visiting the remains of the Roman necropolis at Carmona, one of the finest examples in the Seville region. Here you can find various scared remains of great importance, such as the Elephant Tomb - called such for the stone sculpture of an elephant which the archaeologists found here, the centre of the cult to the god Mitra.

We'll then head back to Sevilla by bus, arriving around 2 pm.

Hotel pick up and drop off.

Tickets to the Roman necropolis at Carmona.

Only some areas are accessible. An accompanying person is required. This must be indicated in the reservation.

Free! Free cancellation up to 24 hours before the activity starts. If you cancel under this time or do not show up, you will not be refunded.
US$ 46.80
Book

Veronica was an excellent guide, she gave us very valuable information for both Italica and the Monastery. Definitely a very nice tour. Opinion translated. Show original.

I travelled by myself
6

I travelled by myself
Show all the reviews
like

9.40 / 10 13,563 reviews
Discover the secrets hidden around the Andalusian capital's historic centre on this free walking tour of Seville.
Free!
Book
like