The Hospital de los Venerables was founded in 1627 and was used until it was pillaged during the French invasion. In 1840, part of the building became a textile factory and residents were forced to leave until the factory was eventually closed and the former residents could return.

Both the hospital and its church are excellent examples of the cheerful Baroque architecture that is so characteristic in Seville.

The hospital's two-storeys wrap around a beautiful central patio with a fountain and various orange trees. Although, the most interesting thing to visit is undoubtedly the church; one of the city's most striking religious buildings.

Once you walk through the church door, you'll be taken aback by the unique paintings covering the vault and walls, and the main altarpiece dating back to 1889.

Interesting, But Not Essential

Visiting the Hospital de los Venerables doesn't disappoint, as it is one of the most interesting architectural buildings in Seville and has been declared as a Building of Cultural Interest since 1971. However, with so many unique buildings that are worthwhile visiting in Seville, we suggest analysing all the options with regard to how much time you're going to spend in the city. 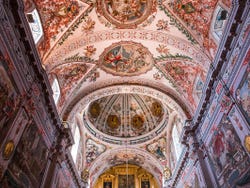 Palace of the Dukes of Alba Hospital de la Caridad