You can find a little slice of the British Isles on the Iberian Peninsula: you can see British and Spanish culture mix on the Rock of Gibraltar. 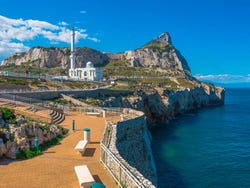 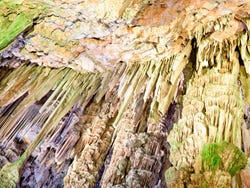 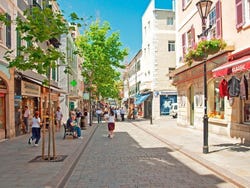 We'll pick you up at the meeting point to get on the bus and head south.

You'll be able to see the contours of the African coast from the Punta Europa viewpoint, and then we'll make our way into the Peñón natural reserve to see the views from Hercules' Columns. The Ancient Greeks considered this point the end of the world, and they currently appear on the Spanish coat of arms.

Our 'rock tour' then continues through the heart of Peñon, and we'll take a look at the underground San Miguel Caves. These passageways filled with geological formations, such as stalactites and stalagmites were a military refuge for centuries and filled with incredible secrets which we'll reveal during the visit.

Having left the grottoes behind we'll meet the most famous four-legged inhabitants of The Rock: the famous monkeys of Gibraltar. They are some of the few wild monkeys in all Europe, and we'll then have free time to have lunch and take a look at the shops of Main Street, the British-style commercial artery on the rock.

The tour then returns to Sevilla, arriving at around 8 pm.

Hotel pick up and drop off.

Entry to the San Miguel Caves.

Entry to the Natural Reserve.

US$ 135.80
No hidden fees or surcharges
Free cancellation up to 24 hours before the service starts
Book

Roman was an excellent guide. He ensured that both English and Spanish passengers understood and he was very knowledgeable and open to any questions. He also provided excellent references for future sites and restaurants in Seville.

I was perfect for me. The guide was very professional.

9.20 / 10 69 reviews
See the magic of Seville, and the Real Alcázar, the Cathedral and la Giralda, its three most important monuments, and symbols of the city.
US$ 48.70
Book
like

9 / 10 46 reviews
Explore the beautiful Guadalquivir river in a fun way when you rent a kayak. Don't miss this opportunity to enjoy Seville from a unique perspective!
US$ 17.20
Book
like

9.10 / 10 32 reviews
Embrace a fusion of different cultures on this guided tour of the Alcazar of Seville. Discover its secrets as you explore the exquisite palace complex.
US$ 36.60
Book