Take a peaceful river cruise along the River Guadalquivir and admire iconic monuments such as the Torre del Oro and the Triana Bridge. 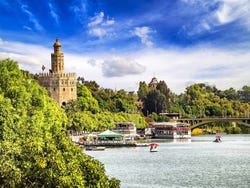 The boats have panoramic decks, from which you can admire the emblematic sights located on the banks of the River Guadalquivir. As you cruise along, you'll see the San Telmo Palace (home to the Andalusian government), the old tobacco factory and the legendary Triana Bridge.

The boats sail as far as the Isla de la Cartuja island, where the Expo'92 was held. From here, you'll be able to see the Pavillion and the Navigation Tower.

After approximately one hour, sailing peacefully along the river, the boat will return to the initial meeting point at the Torre del Oro.

All of our providers comply with local legislation and applicable health recommendations to avoid the spread of Covid-19.

Ticket for a one hour long boat ride.

You can book up to the start time, as long as there are places remaining. Book now to guarantee your spot.

US$ 17.80
No hidden fees or surcharges
Free cancellation up to 24 hours before the service starts
Book

I travelled with my partner
6

The activity was very good. The only thing I have to object is that they do not disinfect before the next trip. Seeing that they did not do it with the next one to ours, I understood that they had not done it with ours either and that in these times I did not like Opinion translated. Show original.

I travelled with small children
10

I travelled with friends
8

I travelled with friends
Show all the reviews
like

9.40 / 10 75 reviews
Explore the beautiful Guadalquivir river in a fun way when you rent a kayak. Don't miss this opportunity to enjoy Seville from a unique perspective!
US$ 17.80
Book
like

9.20 / 10 66 reviews
Enjoy one of the most authentic experiences in Seville, as you explore the historic centre in a horse and carriage. Not to be missed!
US$ 93.80 per group
Book