Discover Seville's legends and mysteries dating back centuries, such as Florinda La Cava, while you enjoy the city's famous street with this Triana Night Tour. 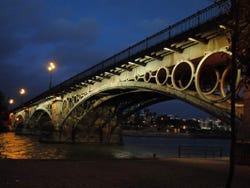 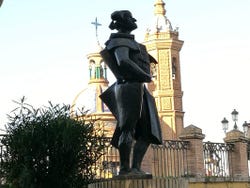 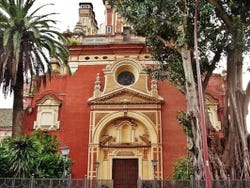 Triana is one of the neighbourhoods in Sevilla with the most legends, anecdotes and stories. When leaving or entering, passers-by are usually blessed in the Virgin of Carmen Chapel, known as "the lighter" because of its peculiar shape. Next to it are the remains of the San Jorge Castle, home to the Holy Inquisition for three centuries. We'll learn about the terrifying legends that are linked to this court before continuing our route on foot through the neighbourhood.

Triana and its narrow streets have inspired many writers, notably the Monipodio courtyard, one of the settings for "Rinconete y Cortadillo" by the widely regarded Miguel de Cervantes. Another writer who was charmed by Triana was Ildefonso Falcones, who sets his novel "The Barefoot Queen" in the area. This story serves as a starting point to tell the story of the Triana travellers, whose songs and dances from the 18th century were the origin of flamenco. Since 2010, this art is considered by UNESCO as Intangible Cultural Heritage of Humanity.

During the tour, we'll also immerse ourselves in the stories and legends linked to the neighbourhood's naval past. In fact, the crew member who first saw America from Columbus' caravels was Rodrigo de Triana. Near the street that bears his name, we'll find the Chapel of the Sailors which is home to the famous carving of Our Lady of Hope of Triana, which crosses the Guadalquivir by the Bridge of Isabel I every Easter "morning".

The two hour tour will finish on this bridge.

The activity takes place with a guide that speaks in Spanish.

Wheelchair accessible. This must be indicated in the reservation. An accompanying person is required.

US$ 9.30
No hidden fees or surcharges
Free cancellation up to 24 hours before the service starts
Book

Capilla del Carmen, next to the Triana Bridge

Fantastic, a beautiful route. Barbara, our guide, is a very close girl who enlivened the visit with a lot of charm and knowledge. Highly recommended. Opinion translated. Show original.

The Tour was entertaining and Adrian, our guide, very friendly and close. A 10. The tour is highly recommended and the stories are very entertaining Opinion translated. Show original.

Great both our guide and the visit itself! 100% recommendable! Opinion translated. Show original.

9.30 / 10 118 reviews
Explore the beautiful Guadalquivir river in a fun way when you rent a kayak. Don't miss this opportunity to enjoy Seville from a unique perspective!
US$ 17.40
Book
like

7.90 / 10 852 reviews
Take a peaceful river cruise along the River Guadalquivir and admire iconic monuments such as the Torre del Oro and the Triana Bridge.
US$ 17.40
Book
like