Immerse yourself in the universe of George R. R. Martin and discover one of the most beautiful monuments in Seville on this Game of Thrones tour of the Alcazar. 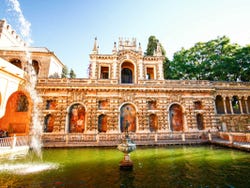 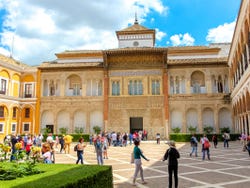 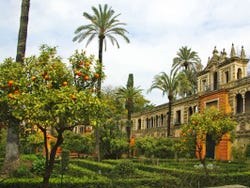 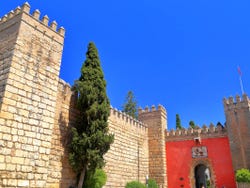 Game of Thrones Tour of the Alcazar

Meet your guide at the scheduled time in the Plaza del Triunfo, a stone's throw from the Alcázar de Sevilla, one of the oldest palaces in the world and the location for the filming of some of the best scenes from Game of Thrones.

Accompanied by our expert English-speaking guide, we'll enter the historic citadel through the imposing Puerta del León, or the Gate of the Lion, ready to begin our guided tour. Admire the Patio del Yeso, a courtyard built by the Almohads in the 12th century and a spectacular example of the Arab architecture that we'll get to know throughout our tour.

As we stroll through the beautiful palace complex, the guide will reveal the relationship between the Kingdom of Dorne and the Alcazar of Seville, one of the most memorable filming locations from the fifth season of Game of Thrones. We'll visit the Palace of Pedro I, the 14th century residence of the king after which it was named, considered to be one of the most beautiful and best preserved façades in Andalusia.

We'll continue our route through the Gothic Palace to the Gardens of the Alcazar, one the gems of the complex and instantly recognisable from the popular TV series as the seat of House Martell, or Sunspear, the capital of Dorne.

After two hours delving into the world of Game of Thrones, our tour of the Water Gardens of Sunspear, or the Royal Alcazar of Seville, will come to an end.

All of our providers comply with local legislation and applicable health recommendations to avoid the spread of Covid-19.

The activity takes place with a guide that speaks in English.

Entrance to the Alcazar of Seville.

You can book up until 24 hours before the activity as long as there are still places. Book now to guarantee your spot.

Wheelchair accessible. This must be indicated in the reservation. Accessible toilets. An accompanying person is required.

US$ 46.20
No hidden fees or surcharges
Free cancellation up to 24 hours before the service starts
Book

Monument to the Immaculate in Plaza del Triunfo.

Impressive the Reales Alcázares !! And very interesting everything that Lola told us, both about Game of Thrones and about the history of such an incredible construction. It is worth the visit and the tour. Opinion translated. Show original.

9.30 / 10 116 reviews
Explore the beautiful Guadalquivir river in a fun way when you rent a kayak. Don't miss this opportunity to enjoy Seville from a unique perspective!
US$ 17.40
Book
like

7.90 / 10 851 reviews
Take a peaceful river cruise along the River Guadalquivir and admire iconic monuments such as the Torre del Oro and the Triana Bridge.
US$ 17.40
Book
like